Coming down off of the adrenaline, exhaustion and high of the Drew Walking Tall auction, just a week later I flew to West Palm Beach to find an apartment.  The palm trees and clear blue skies made for a mini-vacation away from all the work waiting for me back at home.  Though I didn’t find a beach (not a lack of trying) and I had a huge objective ahead of me, it was a nice escape.

The trip was fruitful.  I toured a total of five places carefully analyzing the premises to ensure it would fit our needs.  Due to Drew’s wheelchair, we required a 1st floor apartment and the parking near the apartment would have to be able to accommodate a 10-foot ramp to unroll off of the back of my truck without causing problems for the rest of the residents.  Of course, it had to be in a safe area of West Palm Beach which is relative as WPB is the 14th most dangerous city to live in.  What has gotten into these seniors these days?

In the end, I went with what turned out to be the first apartment I toured that day, The Reserve and The Park at Riverbridge.  Though it was the highest monthly rent and smallest square footage, it was rated highest in all areas by current residents, had the most supreme parking situation for our needs, and was beautiful and well-kept.  I’m not going to lie, I kind of felt like a single and fresh graduate from college shopping for an apartment in some strange city.  Come to think of it, that was exactly my situation moving to New Orleans on a whim in 2001, single and fresh out of college.  Funny how history repeats itself.

As May gets closer and closer, my anxiety is growing and growing.  We only have 2 1/2 more

weeks until our departure and lots of things to do.  We have two doctor appointments in Nashville (1 today), a Drew Walking Tall event, last get togethers with friends, arranging my work responsibilities so others may fill in during my absences and of course, packing.   We haven’t even finalized the exact date we are leaving nor the logistics getting down there (do we take both of our vehicles?  Should Nathan fly back?  Should Nathan drive a u-Haul truck?)

I find myself getting sadder and sadder as May approaches.  Don’t get me wrong, I’m glad that Drew is going to have the opportunity to walk, but this surgery is the end of something.  It marks a new beginning leaving our past lives with Drew behind.  I’m almost mourning the fact that Drew will no longer do his booty scoot.  It’s been a significant part of all of our lives since the first skooches when he started sitting up.   Post-surgery, he will have {temporarily} lost his independence, unable to ambulate room to room without being carried.  He’s surely not going to be happy with this bulky device on his leg.  He will solely rely on us to get into a chair, to his bed, to the toy across the room.  Things that he’s perfectly capable of doing today.  I’m not used to Drew being so dependent on us for basic functions.

I have to keep telling myself that this is only temporary and the payout after surgery is two-fold.  But, this way of life is ending.  It will be a new life for us all. 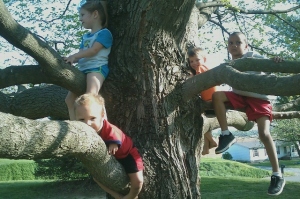 Despite Drew having multiple platelet transfusions and open heart surgery, we just experienced one of Drew’s scarier appointments.  After Drew’s sleep study in January, we are finally consulting with an Otolarangologist about his obstructive sleep apnea.  When I first learned that Drew had this sleep apnea, no details were shared me.  Well, I finally got a full report and I realize now that it was a blessing to not have known about the number of episodes that Drew experiences in his sleep as I would have worried myself into an early heart attack.

When we first visited a neurologist at the referral of our pediatrician, we did so due to the large size of Drew’s tonsils.  The neurologist explained the 1-10 episodes scale of sleep apnea.  Two to three episodes of interrupted breathing in an hour of sleep would be worrisome for Drew’s age and would result in a tonsillectomy.  More than five would be severe and would require special medical intervention.

Well, I was shocked to learn that during Drew’s sleep study, they recorded 57 – FIFTY-SEVEN episodes that night which turns out to be a 10 on their scale.  O.O  <—-that is me when she said those numbers.  Multiple times during the night, Drew’s oxygen levels dropped to 87%-91% due to him stopping breathing for 10 seconds or more or slowing his rate of breathing so much that he wasn’t getting sufficient oxygen.  She said that it didn’t matter what stage of sleep or position Drew was in.  It was a consistent problem throughout the night.

The doctor (who, by the way, Nathan found very attractive) was very concerned about Drew’s thrombocytapenia stating that the risk of bleeding is present for all kids, but would be especially concerning in Drew’s case.  She suggested that it would be very likely he would need a platelet infusion before the procedure.  What was funny is that she set this up as if this were especially daunting or scary.  Even though it’s been over a year since Drew has had an infusion for surgery, and 3 1/2 years since he had them regularly, I did not find this as daunting as she implied.  Funny how things can become “routine” when you have a kid as special as Drew. 🙂

Having his tonsils removed would require an extended stay in Nashville, though not in the hospital to monitor bleeding.  We would likely stay at the Ronald McDonald house after he’s discharged so we can be close in case things were to turn sour.  Then, she dropped the bomb.  She was talking about rushing him into surgery Friday, like, the day after tomorrow. O.O <—again, me.

We discussed it in length to ensure it was really necessary to do something this drastic.  Not to sound as if my priorities are out of order, but I’ve had plans with some girlfriends set for quite a while.  And, with a surgery that would require us to stay in Nashville for an extended amount of time, this would pretty much be the end of his school year.   So, it was decided it wasn’t too dire that we couldn’t wait until August during Drew’s break in between leg surgeries.  So, there it is.