oh, what to say, what to say.  I’m between sleeplessly exhausted and cautiously optimistic this week.  Drew is getting better and better everyday.   And, I stress DAY because he isn’t nearly as cooperative at night.  I was able to tolerate his once-nightly awakenings pre-surgery, but now he is up and fussing between eight and ten times a night.  It ranges from, “I don’t want this blanket” to (35 seconds later) “I’m cold!” to “It hurts!” to “I’m thirsty!” to “Hold my hand!” to “I don’t want this blanket!”  to (58 seconds later) “I want THAT blanket!” and when the comforter suddenly becomes uncomfortable he impatiently yells for the original blanket.  yaaaaaaaaawwnnn….this does not make for an alert and patient mother.  I have to hope that the every-hour fuss sessions will cease once his fixator comes off and recommence the once-nightly sessions (which I look forward to at this point!)  Then, when we have his tonsils and adenoids taken out, if he were to sleep all the way through the night, I just may kiss his ENT Dr. right in the mouth.

Doing his adjustments and therapy hasn’t been nearly as frustrating.  He cooperates nicely during the adjustments and requires little  candy when doing his physical therapy.  We’ve even started to incorporate pre-school learning activities into his daily routine.  Feeling guilty at watching Drew watching TV for 10+ hours a day, I went out and spent over $100 on activities to sprinkle into his day.  We have a couple of pre-school homework books, flashcards, numbers exercises, a bath toy to try to entice him into more willingly taking a shower (it doesn’t), and even got him two little frogs in an aquarium to watch! (Shhhhh…I’m not absolutely certain that the frogs aren’t exempt from the pet policy in my apartment complex!)

We saw Drew’s surgeon, Dr. Paley, for the first time since the surgery and what a day it was, let me tell

you.  After numerous x-rays, a nearly five-hour wait in the first waiting room (that’s right, folks.  Not in the exam room, a five-hour wait in the waiting room after checking in!) and a very disgruntled boy (who, thankfully, eventually fussed himself to sleep), we finally got to see Dr. Paley.  I had been looking forward to this appointment for so long that I couldn’t be mad about the wait. Dr. Paley was impressed with how well Drew was coming along with his leg and noted a significant improvement in the orientation of Drew’s leg.

I’m not exactly sure why, but our adjustment schedule had to change and extended the period of adjustments by two weeks.  And, I learned something very interesting about Drew’s fixator.  Turns out that it will need to on his leg recovery for as long as it will take to make the corrections so with our adjustment schedule being a tentative 64 days, that means he needs to keep the fixator on his leg for an additional 64 days after his leg is properly aligned to allow for the bone to heal for a total of 128 days.  That’s over four months, folks.  It is way too early to tell if his adjustment schedule will change again, either shortening the schedule or extending it again.  And, maybe we won’t get to come home at all in between surgeries.  Then again, maybe we’ll come home with the fixator on for a short period of time during the recovery period.  The lesson I learned this day is that there is no planning ahead!

The appointment took so long that we didn’t have time to return to the apartment prior to taking Daddy to the airport for his sad farewell.  Luckily, about three hours into our five-hour wait, Nathan thought it would be prudent to collect his belongings from the apartment just in case we didn’t get out in time.  This turned out to be a life saver.  So, after leaving Dr. Paley, it was straight to the airport.  We said our quick goodbyes (I honestly didn’t want to drag it out, because even though it is nothing new for Nathan and I to part ways for such long periods of time, this time it felt different and I wasn’t sure I’d be able to hold myself 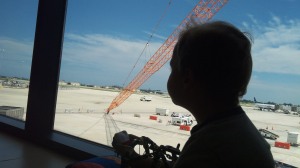 So, we made our way back to our truck, on the way to the exit of the airport when it hit me like a ton of bricks:  I didn’t have my purse, therefore my debit card or any cash, to pay for the parking while at the airport.  After pulling over and scraping every nook and cranny for a spare penny and coming up with a total of 75 cents, I anxiously looked at the clock and my ticket arrival time.  I had been there for less than 4o minutes.  Seventy-five cents will be enough, right?  No.  Three dollars, people.  $3.00 for less than 40 minutes.  But, if I thought I was embarrassed when the girl rolled her eyes at my total lack of preparation, I had another thing coming.  Thinking quickly, I asked if they could send a bill.  No.  The manager on the CB radio didn’t seem to have any sympathy for me being a measly $2.25 short, “She has to pay to get out.”  UUuuhh…ok, let me wave my magic wand here.  It occurs to me to ask if I can pay with a debit card over the phone.  Nathan had his card and was inside waiting to board.  The girl’s eyes lit up and she said, “Oh yeah, you can.  I just need to see your ID.”  Me:

The girl gave me a knowing, “are you serious?” look.  Of course, by this time, there are about four cars piled up behind me wondering why the jackass in the white truck was taking so long.  Sigh

So, while they were happy to take my credit card information over the phone, they now had to have a Sheriff come verify my identity so after the manager politely asked the cars behind to me to back up, I was able to get out of the lane and drive straight across 5 tolls to a parking area to wait for a Sheriff.  I contemplated how pissed I would be to get a $250 ticket for not having my ID on me.  I contemplated what would happen if there was some mistaken identity like you hear about innocent airport travelers who have the same names of terrorists on the “do not fly” list.  I contemplated how stressed Drew would be at waiting an hour for us to finally drive home.  But, luckily, a Sheriff was there very quickly and I knew my driver’s license number so they processed the credit card payment and I was on my way. That marks the second time I’ve gotten away with something purely for the fact that I knew my driver’s license number.  Memorize folks.  It’s handy!

So, I thought it was an omen to have started my shift with Drew alone but it seems to be going very well.  He hasn’t fussed much for Daddy and we’ve been having a good time together playing Candyland and watching his favorite shows.  Aside from the nights, he’s not nearly as intolerable as I was afraid he’d be in this situation.

The new babysitter started today.  She’s quiet and polite.  Drew eventually warmed up to her, but only enough to have a casual conversation with her.  He refused to be fed by her or have his diaper changed by her, but hopefully that time will come.

In other news, we took Drew to the zoo.  He wasn’t as enthralled as we hoped he would be.  In fact, it

was a pain in the neck.  But, he wasn’t watching TV so it’s still a win.  And, aside from the pain the discomfort that this experience has caused Drew, it’s impacted him other ways.  The other day, as Daddy and Dew lay in bed to go “nite-nite”, Drew was using a paper towel tube to “operate” on Daddy’s back.  Drew said comfortingly, “It’s OK Daddy, this isn’t going to hurt.” and Drew would lightly draw the tube up and down Daddy’s back and then said, “OK, this will only be a little ouchie.”  It’s nice to know that even after all of the trauma that he’s been through, that he still perceives doctors as compassionate and friendly figures. 🙂

And, thanks to Great Aunt Aggie for the great gifts!!!

Here is Drew’s progress so far: