Things are still moving along in the Gatten household.  Drew is hanging in there and I’m hanging in there as well, though only by a thread.  It’s a lot more mentally and physically exhausting than your average day with Drew.  In fact, we haven’t been this exhausted since we were pregnant with Drew just learning about TAR and the weekly and nail-biting doctor appointments leading up to his birth.  But, I’m sure that this period will be forgotten as soon as Drew is walking.

But, until then, every day seems to last longer than the one before it.  Drew is doing great, don’t get me wrong, but the daily showers, adjustments, physical therapy, interrupted sleep (though it’s better, it’s still not perfect), showers (I despise this one so much I had to list it twice…look for it again shortly), defiance and lack of cooperation from Drew (justifiable, but no less frustrating), physical effort it requires to move Drew, frequent trips to the hospital, showers….I could go on for longer but I’ll move on.

It got me thinking the other day about how I’m going to celebrate the end of this period in our lives.  Drew will be walking, he’ll once again be back to normal.  We’ve returned home to our family and our friends and our lives in Kentucky will commence. Which will be a perfect time for Nathan and I to enjoy an excursion sans Drew.  Where will it be?  Here is a list of what I’ve considered (in no particular order):

Really, any one of these will do.  Hell, my babysitter volunteered to watch Drew last night while I went out for a break and I was tickled to death to go to the mall 1.5 miles down the road.  Needless to say, I did splurge a little bit to treat myself. I bought three pair of shoes, a book, face cream with salt from the Dead Sea (hey, add that to my list), an improved set of trimmed and proper eyebrows, and a book.  It was nice to focus on myself for the first time since we moved.

Drew is doing pretty good.  He’s actually participated in physical therapy with a very respectable attitude the past couple times.  Though getting his struts changed is a lot of havoc and I’m pretty sure the technician who does them doesn’t care for Drew too much which is disappointing considering the fact that Drew has a massive metal device drilled into his leg in 13 different areas being twisted and stretched yet somehow this technician seems to think that this is all rainbows and bunnies for four-year old kids.  Granted, the strut changes don’t look all that painful so Drew’s screaming objectives sometimes appear to be for dramatics, but I wouldn’t be all that delighted about having anybody’s hands anywhere near open wounds or pin sites that ache.  So, it’s his loss. 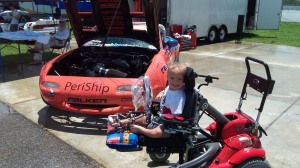 I took Drew to the Moroso Motorpark International Speedway over the weekend and we had a great time.  We almost didn’t make it because this place was so far out-of-the-way.  I had googled directions and printed them out, but apparently this place was so remote that the mapping system was wrong so I ended up driving about 20-25 minutes out of my way until I found the right direction.  Just as I was driving through what appeared to be a lost highway surrounded by swamps as far as the eye could see, I finally saw the heaven’s light shining up a sign pointing me in the right direction.

Drew had a great time.  We had taken Drew’s wheelchair and Drew was a hit.

Everybody was in awe of Drew and his wheelchair.  Some vendors got up and greeted us and gave us stickers to add to Drew’s collection on his chair.  A nice guy from one of the racing team’s pit crew gave Drew a team t-shirt.  We got to sit in the grand stand to accommodate Drew’s wheelchair and watched customized and tricked out cars drift across hairpin turns and it was fascinating.  Two would go at a time and in this choreographed maneuver, they would drift as they took sharp turns at high speeds making their cars float sideways through the turn and rotate directions on the turn immediately following.  The cars were within feet of each other but most of them managed to stay perfectly aligned with each other.  But, it was real exciting to see them crash too!  I kind of felt like Tim Taylor when I grunted in my mind with excitement and adrenaline!  I don’t know how enjoyed it more: me or Drew! 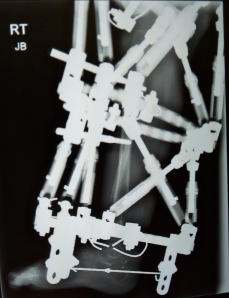 More excitingly, we are  halfway through the adjustments.  We only have 12 more days of adjustments on the top portion of Drew’s fixator and only 30 days left on the bottom portion.  That is if the schedule doesn’t change again like it did for the bottom portion in mid-May.  We had our second follow-up with Paley’s staff this week and things looked good and no change to his schedule thus far.  So, if all stays on this course, we should only have about three more months of the fixator on the right leg (it has to stay on for recovery and bone healing for as long as it took to get corrected.)  We’ve been told that the pain subsides when the adjustments stop so I’m looking forward to that for now.

Here is Drew’s picture documentation for this week (yes, I know I know, it’s late…I’ve been handcuffed to my computer for the last 5-6 business days working a huge project and couldn’t stand the sight of a backlit device for any longer than I absolutely had to):