Well, the good news is that Drew’s recent changes in his heart doesn’t require immediate intervention.  They are going to continue to follow him clinically, but we have been downgraded to twice yearly appointments.  We had been seeing the cardiologist once a year so this is a small step backward.  But another heart surgery is inevitable at some point.

While it’s great that we don’t have to go through with the heart surgery which would have thrown off his leg surgery, to me it’s just another ailment to continue to worry about.  I’d almost be relieved if they just went ahead and fixed the heart so I don’t continuously envision watching him fade away from me during a temper tantrum or see solemn-faced doctors approach me after starting his leg surgery.  My logical side that he isn’t in that much danger if the surgical team won’t proceed with surgery, but the part of me who lost a child before always fears that Drew will be yanked away from me at any moment.  Even 9 1/2 years later, after losing my first son who had heart defects, I still fear losing Drew in some way.

I recall during Drew’s early years being overly paranoid he was going to be kidnapped.  When Drew developed a urinary tract infection that went into his blood, I was convinced that the hospital was going to remove him from my custody because he had developed the infection under my care.  The aftermath of losing a child will always be there I suppose, making me overprotective and ultra-sensitive to any ailments that Drew may be demonstrating.  I suppose I won’t ever completely relax, but I will be relieved when I no longer have to know that my son’s heart isn’t 100% perfect.

We are halfway through August and we have begun the discussion to plan our return trip to Florida.  And, with the cooling off of the weather which I can’t help but think is the first sign that summer is ending and fall and winter is on the horizon, I can actually say that I’m a little excited to be returning to Florida so I can enjoy extended warm weather!  But, for you folks are flipping me the bird, never fear, I read the other day that meteorologists are predicting even more hurricanes and major hurricanes on the Atlantic than originally thought.  So, any excitement that I have returning to Florida is quickly replaced with nightmares of evacuating West Palm Beach ahead of a major hurricane.  Being a Kentucky girl, I thought I would never have to worry about that!

We even received a call from Dr. Paley’s office who will be sending us the pre-op packet for his September surgery.   We are approaching the end of being accustomed with the fixator and going on about our lives as normal and will be starting with the unbearable pain, misery, and disgruntled Drew once more.  I have expressed worry about having to go through all of the pain and misery again after seeing how Drew was coping (or not, at the time) with the fixator, but now, I’m more hopeful that this surgery won’t be so hard on him.  Yeah, it kind of sucks knowing whats in the future, but maybe it will be a benefit after all.  I think Drew understands now why we are doing this and is excited about standing up and walking which will make the second surgery easier.  But, I’m sure he will still have moments of weakness and frustration.  Hopefully the painful period after the surgery will be much shorter!

However, what we gain in experience may be lost with the increased physical therapy that will be required which could exacerbate Drew’s pain level.  We only require PT three times a week with his current leg because his joints are fixed (due to the fixator) so only options are stretching and maintaining muscle.  But, with the removal of his fixator and placement of the next one, he needs PT on both legs so we’ll be going five days a week.  With the removal of the fixator on his right leg, they’ll be free to perform more intensive and painful therapy now that his joints are mobile.  When I spoke about listening to screams of patients while in the waiting room for therapy, those screams came from people whose fixators had been recently removed.

Speaking of therapy, we recently received a not-so-welcome letter from our insurance company.  When we started PT in Florida, Dr. Paley’s office gave us a disclosure of coverage which stated that our insurance would only cover 30 days of PT a year.  Any sessions exceeding 30 will be billable to us and cost $250/session.  So, we submitted a grievance in attempt to extend the coverage for Drew’s PT.  Well, the request was denied so we will be responsible for the PT sessions for the remainder of this year.  All I can say is thank Union County for helping us raise so much money because this expense will be $1250 a WEEK!!  That’s $5,000 a month.  We still have plan B and a plan C, but we’ll let you know how that turns out.

Drew is doing great.  He actually enjoys and excels at therapy.  Never thought that I would say that.  He’s just as happy and carefree as before.  We go on daily walks and Drew really enjoys racing us and driving circles in the driveway, Mama on her bike, Daddy on his skateboard and Drew in his wheelchair.  Here’s a cute story I want to document: Drew had gone to bed and as is common, Daddy laid beside him waiting for Drew to fall asleep.  I stayed in the living room and was watching a funny show and laughing hysterically.  Drew asked Daddy, “What’s Mama doing?”  Daddy: “I have no idea.”  Drew whispers, “I think the tickle monster is gettin’ her!”

Don’t forget that we are hosting a Drew Walking Tall Music Fest on August 25th at the Renaissance Center in Morganfield from 11:00 am – 6:00 pm featuring blues, jazz and classic rock local bands.  The Eagles Club will be serving food and I’ll be selling t-shirts.  And there will be a photo booth available for donations.  There is an event on Facebook with the info.  Please share with friends! The band line up: 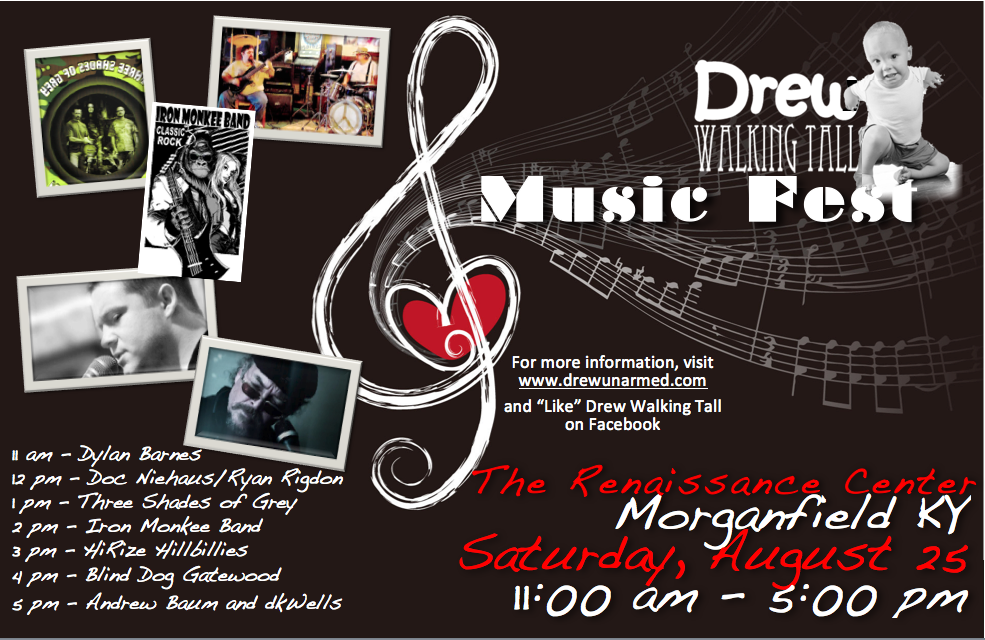