I apologize for the long silence between posts.  In between a transportation-nightmare of a business trip to Chicago to formulating a plan to start our return to Florida, I’ve been pretty busy.

As I mentioned, I spent the greater portion of this week in Chicago suffering from the work commute blues that I had forgotten about since I’ve been working remotely for over a year now.  Well, I guess not so much “forgotten” as much as “didn’t experience” in my small rural Kentucky life.  None-the-less, it only reinforced how good I have it working from home.

During our long commutes into the city, I got to share my story about Drew with the team.  Of course, I had to pull out my trusty computer and share my YouTube and Facebook videos of Drew to further impress my peers.  One of my favorites is of Drew playing basketball.  Of course, there is swimming.  And, this one (Please avert your eyes between 1:00 to 1:21 and 1:54-2:00 as an over-zealous husband was at the camera! lol)

Anyway, in watching these videos again after such an eventful year, it made me nostalgic for the way things used to be.  I used to be able to carry Drew on my hip with my arm around him.  Drew used to hop freely around the house and outdoors.  I used to be able to hold Drew very close.  But now, I must carry him with an awkward, heavy and solid device on his leg.  Unless Drew is in his wheelchair, he’s pretty much isolated to sitting on the couch.  Now, I can’t hold him as close and enjoy those nice big bear hugs with him completely in my arms.  I miss the time before the surgery.  When Drew has his next surgery, it’s going to weeks before we can touch him without causing him excruciating pain.  It’s been almost five months with this fixator and we are looking at another five months ahead.  I just want my normal boy back.

But, this a means to an end.  He will be walking.  I’m still a little unclear at what level he’ll walk, but not being confined to a wheelchair 100% of the time is what we wanted.

This weekend begins the anxieties of packing and moving.  But, Drew is really looking forward to it surprisingly.  And, now that the weather is turning here in Kentucky, I’d be lying if I wasn’t excited about returning to the shorts and t-shirt weather of West Palm Beach.  A new friend from Miami said that even during winters, it may get to 50’s at night.  I know ya’ll hate me now.

At least we got to enjoy the corn festival.  Drew got to play some games, win prizes and enjoy the parade.  It was a nice event to enjoy before we leave Kentucky. 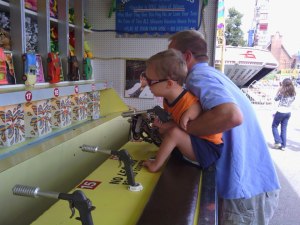 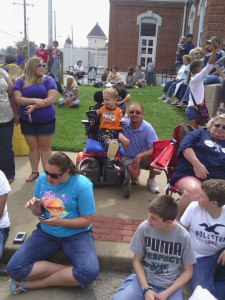