We have been dreading and anticipating Drew’s pre-op appointment this entire week.  Maybe it was counting down the days to major surgery, but it seemed these days have been creeping at a snail’s pace while we savored last experiences we knew we wouldn’t be able to enjoy for a long while after Drew’s surgery.  So, it was with bated breath that we dressed and made our trip to Dr. Paley’s office for Drew’s pre-op appointment.

We reported to the surgical center, completed some paperwork and it wasn’t long until we were off meeting with Dr. Paley’s staff.  We completed the standard paperwork and verified the surgery we were expecting in the morning (remember this fact as it will be discussed later in this post.) There was no messing around as almost immediately after entering the room they quickly began the prep for Drew’s blood draw.  Drew was not pleased and his objections were loud and clear.  But, with coaxing, Drew actually handled the blood draw relatively well.

He was, of course, anxious.  But we convinced him to be very still so we would only stick him once.  They were attempting to get blood from a vein in his ankle to which I tried to talk them out of as I recalled to them the horror story of the blood draw back at home in this very location in his foot that required four sticks.  But they were confident they could do it.  So, I begged them, “Please, get it in one stick.”  The nurses were very kind and gentle with Drew and talked him through the entire process of cleaning the area all the way to counting down to the actual stick.  And, even at 3, the climax of stick, Drew held his composure very well.  It’s funny now, but at the time he was “holding his bubble” which is a practice they do at the elementary school to encourage the kids to remain quiet in the hallways.  Drew puffed up his cheeks and didn’t even cry out when he was stuck.  After the stick, we reassured him that the hard part was over, but he was “humming” quite urgently in fear and, I suppose, in an effort to release stress.  He complained about pain in his foot for quite a while after that and wasn’t in the mood to converse with anybody, but he eventually warmed back up once we reported to the physician’s office that included a toy room.

We were encouraged to arrive to an almost empty office as our last visit to this office before getting the release to come home involved a 6 hour wait in the crowded waiting room while waiting to see Dr. Paley.  But, our hopes were premature.  It was no six-hour wait, and I hate to complain after some of our experiences in the past, but it was over an hour before they even called us back to x-ray.

In x-ray, Drew did surprisingly well.  He cooperated and didn’t scream like he usually does.  X-rays have never been easy for him despite their ease and pain-free pictures as compared to other procedures he’s experienced.  But, Drew was still and we managed to get all of the pictures we needed the first time.  See! I told you, Drew! Nathan and briefly discussed why they didn’t take x-rays of his left leg but we deduced it was because they had the x-rays from our last visit earlier this year. But, we were excused from x-ray off to our next destination.

surgical staff.  We were actually pretty excited as it may not turn out to be the all day event we were expecting.  They had Drew’s chest x-rays displayed on the monitor which Nathan and I studied.  I got to see the staples that are in Drew’s chest that were placed during his open heart surgery so that was pretty interesting.  And, I’m no doctor, but his heart looked huge! Nathan even pondered if it were his lungs.  So, I was intrigued to hear if the doctor’s would be concerned about it.

One of Dr. Paley’s physician assistants came in and had to apologize because something had come up and there would be no reason for us to wait around as we could take care of everything tomorrow before the surgery.  So, our appointment was cut short which was nice because Yaya and Grand-dad were back at the apartment waiting for us to come home so we could all go swimming.  I made sure to ask specifically about Drew’s x-rays and he said they looked wonderful so that was a relief.  So, we packed up our things and headed home. 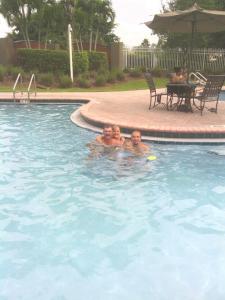 We went swimming at the local pool, enjoyed a new movie Yaya and Grand-dad surprised Drew with (The Lorax) and I suggested Five Guys Burgers and Fries for dinner as it was one hell of a last meal before a long stay at the hospital.

On our way back with Five Guys carry-out, my phone rang.  It was Dr. Paley’s office to catch up on conversation we missed this afternoon.  Drew’s platelets were 120K which is AWESOME!! That’s they highest they’ve ever been without a transfusion and are definitely high enough to not require a transfusion before tomorrow’s surgery.  Yay!  But, the conversation quickly took a turn.  The doctor explained to me that Drew’s right fixator would be removed and casted with a hard cast from his foot to his upper thigh.  Then he asked, “How long are you planning on being here in Florida?”  I responded that “last time, it was three months.”  The doctor was a little surprised by my answer as apparently Drew is only scheduled for removal of the fixator and won’t be having the left one placed.  Evidentially there was a major misunderstanding because, on average, they like to wait six weeks between removal and placement of fixators.

SO – this means several things:

We’ll find out more about the  misunderstanding and his plan for his next surgery tomorrow, but for now, we are now just expecting to have the right fixator removed.  He’ll then have a cast placed for two weeks and then a custom-molded brace to wear for 1-2 weeks depending on swelling.  So, no, we will not be returning home during this six-week period as we’ll have the cast and the brace to attend to.

The funny thing is, we were asked AT LEAST twice to confirm the surgery we were expecting tomorrow and the fact that we mentioned placement of a 2nd fixator that evidentially was not in Drew’s plan was never caught.  One nurse was reviewing some paperwork and mentioned that we were scheduled to be released from the hospital the same day of the surgery and we were like, “Whaaaaaaaaaat? That can’t be right!” and the nurse even raised an eyebrow.  But, she chopped it up to being a clerical error.  And, a separate time, I saw a piece of paper that had “outpatient” circled and thought that was odd as his anticipated surgery was definitely an “inpatient.” But, I figured that it was referring to today’s pre-op appointment.  And THAT’S why they didn’t take x-rays of his left leg!

It is a little bit of a relief. Kind of.  I mean, I wasn’t looking forward to having a drugged, disgruntled, incapacitated, pained boy with a heavy cast AND a heavy and painful fixator to move about.  He’s awkward enough with just the fixator.  And, at least Drew will get a little bit of time between fixators to enjoy his device-free legs.  And, we’ll get more swimming time after all!

Sigh.  So, I’ll keep the blog and Facebook page updated tomorrow during Drew’s surgery so please check often and keep us in your thoughts.  Who knows what will change next!