I had been counting down 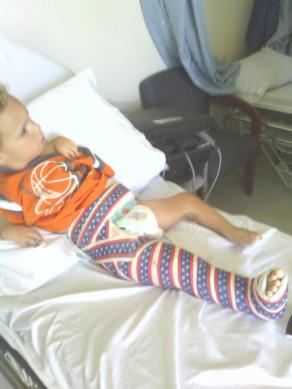 the days until Friday, October 12 and finally this eventful day arrived.  I had been doing what I can to get Drew excited about the removal of the cast telling him we were going to go to the movie theater tonight and watch a movie.  The poor thing hasn’t been out of the apartment much because he couldn’t sit up so using his wheelchair was out of the question and he wouldn’t be able to enjoy many sights or events while laying on his back.  So, I was excited that we’d finally get to break the monotony of lounging around the apartment.

But, as we packed up and headed to the hospital, Drew began to get nervous.  I reassured him as best as I could as I really didn’t know what was going to happen either.  We arrived to the same ol’ waiting room and it was the same ol’ rountine: wait.  It was about an hour when one of the main physician assistants came to speak with us and asked for a prescription for Drew’s brace.  Uh….I don’t have the prescription, I am reporting here to the office for all of this stuff as scheduled in your calendar.  Apparently, they need a prescription to tell them what kind of brace he needed and Dr. Paley wasn’t in the office today.  Ugh…really, this office’s lack of organization baffles me. These doctors can repair legs, lengthen arms, perform state of the art life-altering surgeries and they can’t friggin’ schedule an appointment efficiently?  I just looked at the doctor like, “OK. Well, we’re here sooo…”  He jumped up to “make a call.”

Not too long after, he returned and had luckily spoken with Dr. Paley (in India) who advised him of the required brace.  Thankfully because I would have lost my $#%^ if they backed out of cutting the cast off.  Actually, they still would have cut the cast off. I didn’t care.  THAT CAST WAS COMING OFF TODAY.  I didn’t care if he wasn’t fit for a brace today and we needed to make a separate trip out next week.  It didn’t matter.  They were cutting it off.  TODAY.

So, off we went to the room.  The guy showed Drew the saw and demonstrated its safety by touching the running saw to his own arm, chest and back to show that it didn’t hurt.  Drew was captivated and actually requested it to be placed onto his back which the guy obliged.  Drew was totally cool with it.  So, the cutting began.  Drew watched intently and things were going fine.  Until…until about halfway down his leg Drew jerked and began freaking out.  Even though this guy had just held this saw up to his own flesh, I was convinced he had just amputated his leg.  But, he said that it was just that the saw was getting hot and the padding was likely heating up so he carried on.  Drew was so upset, he was starting to choke and dry heave.  But, finally got it off.

Drew didn’t calm down, but the guy removed all of the old padding underneath

the cast (thankfully, because it was soaked in urine) and wrapped the cast in brand new, clean, white wrapping.  Then, placed both sides of the cast back on and used Ace bandage to hold them together.  He’ll be wearing his cast like this until he gets his brace. 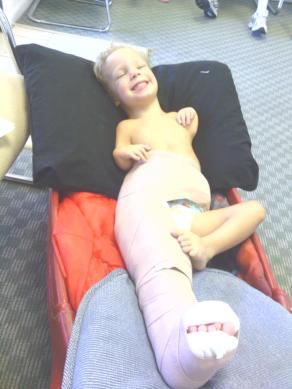 So, off to Jupiter we go (the town, not the planet!)  Luckily, I have a handy little navigation tool on my cell phone that guided me to my location about 15 miles up I-95.  I didn’t know that the brace place wasn’t on the St. Mary’s campus so I wasn’t prepared to have to drive to an unfamiliar location.  It was an ugly little building, but we weren’t there for very long.  They made a mold of his leg and are going to custom-build a brace for him. We should get it byTuesday.

I was very disappointed to learn that we wouldn’t be able to go to the movies like I thought because he can’t take the cast off for very long.  The doctor was very clear.  No weight-bearing and he must wear it 24/7.  The rotation and the contractures preventing his leg from straightening would easily come back at this point.  So, I didn’t want him to  miss the movie because he’s on his back.  So, we’ll wait until he gets his brace (which better not be like the spica cast in the fact that it prevents him from sitting up because I will self-implode.)

I just got done giving him his first bath since May.  And, I actually got to wash every inch of his skin.  Skin that I have been anxiously awaiting to get to scrub.  The fixator made it impossible to get to every angle of his leg and of course, the cast made that worse.  It was fascinating getting to look at his leg, so fresh and so new.  It’s strangely wobbly and jello-like.  He can barely move it at all.  Even in the bath, I couldn’t let go of him because he easily lost his balance and would fall backwards.  You’d be amazed how much one leg plays into sitting up in water and maintaining balance.  His knee is swollen and his pin sites don’t look all that bad.  Even the big ones have healed nicely.  He’s in some pain, but he’s bearing it as much as he can.