So, I had written an entire post, ran the spell check and was preparing to publish it when POOF! it disappeared!  And, things never sound as good as they did the first time, so aggravated and spent all of my creativity for today, here is a condensed version of what I wrote. 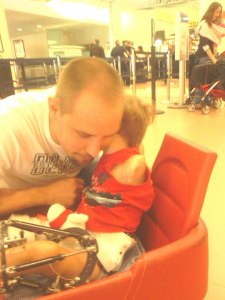 This week, we dropped Nathan off at the airport and he has flown home to Kentucky leaving me and Drew here alone for the first time since his left leg surgery.  We aren’t sure yet whether or not he’ll be home for Christmas as he’s taken a lot of time off of work for Drew’s surgery and it has interfered with his regular schedule and he’s doing what he can to make up for lost time.  Especially since we’ve lost half of our income with the loss of my job.

Physical therapy is going OK.  We go five days a week this time as opposed to three days a week like with his right leg.  Now that he has two legs that require therapy, the additional days are necessary.  Tuesday was an exciting day because Drew took his very first steps.  It was very exciting but I was very disappointed that Nathan was missing this important event.  I knew he’d be devastated.  Drew was justifiably anxious as they hooked him up to a harness and snapped him into this contraption built on top of a treadmill, but as the harness allowed him to dangle at just the right height to place both feet on the ground and in an upright position.  His protests stopped fairly quickly as he swayed back and forth enjoying the new freedom.  He proclaimed, “I like this!”  And, we turned the machine on and he slowly took steps.  He moved his right leg pretty good by

himself, but required some help with his left leg, which is understandable.  It was so surreal seeing Drew standing tall on his feet and taking steps!  Check out the video here.  He walked for a total of over 10 minutes which was an outstanding feat as his therapist, Fran, bragged that was the longest anybody had ever gone walking for their very first time.

Walking and standing so long put some stress on his pins and a few of them have begun to seep and ooze.  So, I’m having to clean them a little more often than before.  And, his pin sites on his ankle have turned red and splotchy and he has an area on the inside heel that looks the same way.  His regular therapist, Don, said it looked like normal stress when someone is using their foot in a new way so we’ll keep monitoring it.

Adjustments are going pretty  much the same.  Just upon seeing the paper schedule, Drew immediately begins to moan and protest followed by about an hour of moaning and groaning.  He cries, “It’s too tight!  Loosen them up!”  Poor thing.  Some of the struts are tougher than the others, especially the back ones…the ones on the back of his fixator seem to cause the most discomfort.  I got to looking at his schedule today and one frame has adjustments scheduled until the end of January!  That’s almost an entire month longer than the schedule on his right leg!  And, it’s unlikely that they won’t extend the schedule at some point (his right leg schedule was extended twice.)

Being unemployed has been a new experience for me.  Not that I don’t enjoy spending time with Drew, but it was nice to have the one part of my life that was fixator-free and took my mind of pain and adjustments.  Now, my entire day is going to the ends of the Earth to appease him, to keep him occupied and comfortable.  It’s been over nine years since I’ve not worked for a living and I’m really looking forward to getting back in, but I am going to spend this time where it’s needed most: with Drew and the new baby.

I spent my extra free time getting the Gatten’s Christmas card done earlier than ever before.  So, enjoy: 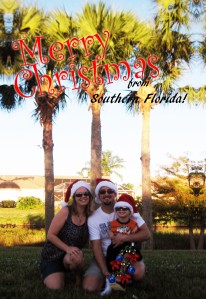 And, here is Drew’s progress for his left leg so far: