I know it has been a long time since I have written.  My schedule is pretty rigid – maintaining a household, breast-feeding a baby, and all of the work that goes into raising Drew, but something so special has happened that I have taken time out of my regularly scheduled cleaning routine while Drew is at school to update you on this amazing event.  But, to ensure that it has the desired effect of amazement and inspiration, please allow me to set this up.

As you may know, Drew has spent five years of his life struggling with mobility.  Although, he didn’t really struggle back when he did his booty scoot.  Prior to May 2012, he freely moved from room to room, albeit on his butt in what I still consider the C-U-T-E-S-T and most charming maneuver that I sometimes, even today, still miss.  As endearing as it was, we knew it wasn’t a permanent solution.  We knew that we had to do something so Drew wouldn’t be confined to a wheelchair permanently.  So, he started a series of corrective surgeries.  We packed up all of our essential belongings and moved to West Palm Beach Florida.  Not for the weather, the beach or attractions, but to subject our then four-year old son to months of pain and therapy and none of it Drew willingly signed up for.

For months at a time, Drew had an external fixator placed on his leg affixed with large pins impaling his skin, muscle and bone through and through in dozens of various locations from his toes to his hip.  We performed daily adjustments that gradually twisted and extended his legs into a straight, neutral position.  These daily adjustments were painful and Drew’s tears would immediately start to flow when we pulled out that familiar paper with the schedule of adjustments.  Showers were another source of grief.  We were forced to clean each individual pin site causing more pain for Drew as we washed with a dishcloth and soap each wound, the entire time having to try to ignore Drew’s helpless pleas to stop hurting him.

Then, it was time to take him to physical therapy where he was forced to lift, stretch and move this leg with a heavy device and its bleeding wounds.  Drew would scream and beg for mercy amongst a half-dozen other kids experiencing some of the worst pain they’ve felt.  Progress was slow and frustrations were high as we tried to help Drew fight through his pain to achieve this goal that we agonizingly chose for him.

We hit a lot of obstacles along the way.  Drew’s foot was turned the wrong way for three weeks causing unbearable and unnecessary pain.  Drew’s left femur was fractured during physical therapy, which is a testament to how physically demanding therapy was.

Throughout this 14-month process, it took a toll on us as parents having to witness our beloved son experience such pain and stress.  We constantly worried that it would break him spiritually.   Having to be the person causing his pain was heartbreaking.  He would look up at me with tears streaming down his face and beg me, “Why are you doing this to me, Mom?  Please stop!”  Even thinking of it now makes my throat hurt.  No amount of rationalization would satisfy Drew or help him accept these events.  There were days that were so hard for me that I would have to leave Drew screaming in agony to go outside our tiny apartment and cry myself for fear losing it in front of Drew.  Sometimes, I would eat my dinner on the steps outside our apartment, crying hysterically in frustration, in sadness, in loneliness, because I couldn’t even get one moment’s peace.

Never really getting the reassurance we needed from the surgeon that all of this pain and grief would culminate in Drew walking, we struggled with our confidence.  Was all of this really worth it?  Even if Drew walks, it would be at the expense of Drew’s happiness.  Instead of the typical five-year old activities that we should have been able to enjoy, we couldn’t go camping or to amusement parks or to the local jungle gym.  Drew was pulled out of school to complete the surgeries.  We missed family and friends.  He had a birthday with no formal party.  We spent Christmas by ourselves.  The sacrifices we and Drew were making were insurmountable.  And, we did this not really knowing for sure how it was going to turn out. 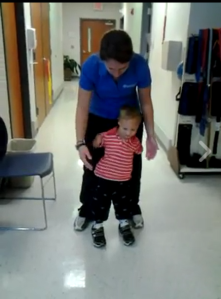 So, imagine my tears and relief as Drew, for the first time, walked to me.  No wheelchair.  No gait trainer.  Not even anyone holding his hand.  Drew walked.  Drew took steps.  During physical therapy yesterday, Drew was practicing his balance and bravely took a step with his right foot.  Feeling confident, he took another step.  Seeing his ambition, his therapist followed closely behind and let go of him.  And, Drew walked.  Just as I had anticipated at seeing Drew take his first steps alone, I cried.  I held him so tight and told him how proud I was of him and cried, this time out of joy and relief.  The 14 months’ events flashed through my mind in fast motion, recalling all of the emotional trauma we were all subjected to.  All of our doubts.  All of our frustrations.  Watching Drew walk by himself for the first time was tremendous.  I have waited 5 and a half years for this moment.  This was the most meaningful moment I have ever experienced.  It was almost bigger than Drew being born.  It was a miracle.

Of course, you know me, it wasn’t but a few hours later that I suddenly had the epiphany about how dangerous this new ability would be for Drew.  Having such short arms, he would go down like a tree should he fall.  He’s already had one close call, his face a mere two feet from the hardened floor.  It wasn’t long before I started imagining a broken nose, broken jaw, massive head injury, missing teeth, an emergency rush to the ER covered in blood and a now traumatized Drew who would refuse to walk again.  Along with the lack of arm length to catch himself if he falls, his braces on each leg keep his legs rigidly straight so he’s not able to even “tuck and roll.”  Fearing the inevitable fall, I’ve already instructed his teachers and other personnel at the school to not attempt to allow him to show off his newly acquired skill until I’m able to arrange for a helmet to protect him from serious injury.  My anxiety level is so high that I’m already nervous and expecting the worst to happen so I’ve already made contact with his surgeon to refer us to a local orthotist to have a helmet custom-made for him.  I hope it comes fast because Drew is so excited about walking that he requests to do it all of the time.  In fact, it’s not really walking.  He keeps trying to run!  I just hope that we get this helmet before his first fall!

I have to commend Drew for his strength, determination and ambition.  Throughout this  process, he could have very easily given in to the pain and stress.  He could have checked out, allowed himself to be defeated.  He could have been angry with us for forcing him through it all.  He could be spiteful, lazy and unmotivated from all of the physical and emotional trauma dumped upon him.  But, through it all, he has remained focused and ambitious.  Even with walking for the first time, as you can hear in my video, he kept trying to run.  We had to hold him back.  This is evidence that attitude is  CHOICE.  You can choose to be disgruntled and miserable, or you can choose to accept things for what they are and move on.  You can either have difficult choices or tasks and be miserable, or you can have difficult choices and tasks and think positive and just go with it.  Either way, you have difficult choices and tasks.  Complaining, whining, crying about it doesn’t make those choices and tasks go away.  Your attitude is your choice.  We have a lot to learn from Drew.  Drew has overcome tremendous obstacles: shortened arms, two open heart surgeries, a medical history that could fill a novel.  At the tender age of five years old.  After all that Drew has been through, he chooses to RUN.  He doesn’t just do mediocre.  He pushes himself to exceed expectations.  He goes for the gold – no ifs, ands or buts.  All this at FIVE YEARS OLD.  If this isn’t inspiration, I don’t know what is. 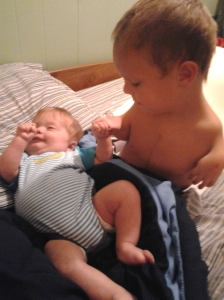 Aside from this exciting new development, things are going pretty well.  Drew has finally accepted his little brother, Holden.  Holden happened to babble one time in Drew’s general direction and Drew was sold.  Ever since, Drew has enjoyed Holden’s presence, even reading bedtime stories with him.  Drew is doing great in school although it’s obvious that his needs in the motor skills area are far greater than was is currently being addressed so I’m anxious to discuss how to help Drew in school even more.  We recently found out that Drew needs yet another set of tubes in each ear so he’ll be undergoing yet another (minor) surgery that we weren’t exactly planning for.  And, we are anticipating our trip to West Palm Beach in less than a month to visit Drew’s surgeon.  I’m actually looking forward to returning to West Palm Beach because, as much as I love Kentucky, I really do miss West Palm.  It’ll be like visiting our old home!