It’s no secret that Drew has undergone many surgeries, 16-17 total.  So many that I struggle to remember exactly how many (has he had three sets of ear tubes or was it four?)  So many that I struggle wondering if I should count his GI procedure as a surgery (it was just a camera going down into his stomach…there were no incisions…but he was under anesthesia and he did have to refrain from eating or drinking prior to the procedure…but it was far less severe and life-impacting that his others…but he was seen by specialists…etc.)  But, surprisingly he’s never had any surgeries on his upper extremities despite them being so severely affected by his syndrome.  They’re the things people notice about Drew first. 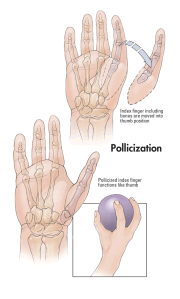 But, he finally had his first upper extremity surgery.  It was a surgery we’ve been anticipating for six months now.  We were excited about the benefits to be appreciated, but at times it really struck me how extreme the surgery was.  Yes, we’ve done multiple surgeries on his legs to correct them thus they were different from what he was born with, but now we’re planning on removing a piece of his body making his body form even more different from a standard human form.  He

would no longer have ten fingers, he’d only have nine.  It seems so outrageous at times.  I found myself over-explaining almost defensively when asked about this surgery as I anticipated people being shocked we were electively amputating a piece of his body.

His current thumb was under-developed and because he has no forearms, his thumb wasn’t attached to anything so it sat unused inside his palm (if you were to make a gesture indicating the number four using your index through pinky finger, the placement of your thumb in your palm was Drew’s natural and permanent position on his hand.)  He had little to no movement and was simply in the way when grasping objects.  When he grasped objects, he always did with his index finger and middle finger.

One day, riding home from physical therapy, Drew asked me if doctors ever cut off body parts and he actually asked to have his thumbs cut off because they’re useless.  So, that’s when I reached out to Kosair in Louisville to get advice from an upper extremity specialist.  We were then referred to Cincinnati Children’s Hospital to gather more insight on his thumb and we discussed options.

Option one was to remove one of two tendons present in the index finger and place it in the thumb giving it the necessary material to be functional.

Option two was to amputate the thumb and move the index finger down into the thumb position to act as his new thumb.

They observed Drew picking up items and his current preference with using his hands.  He used the index finger/middle finger pinch expertly.  He played on a tablet using his fingers.  They noted he completely disregarded the presence of his thumbs.

So, combined with the observations of how Drew used his index/middle finger grasp as well as the wide space between the index and middle, it’s apparent that Drew’s brain adapted to think of his index finger as a thumb.  The area of our brain that identifies our hands and fingers and manipulation appears to have naturally rewired adapting to Drew’s unique body.   With these observations, the answer seemed clear to us.  Let’s work WITH his body who has already adapted to use his index finger as a thumb instead of giving him this new 5th finger and making him relearn how to use his hand.  So, we decided to amputate his thumb and move the index finger down. 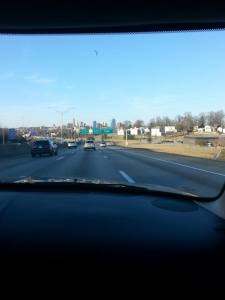 All of us including his Yaya (mother-in-law and Drew’s beloved grandmother), drove to Cincinnati Sunday afternoon and checked into the Ronald McDonald House, a wonderful organization that provides a comfortable and very affordable place to stay for families who travel for medical purposes. (Seriously people: Please keep this organization on your list of causes to donate to as they are highly recommended due to accountability and transparency and you can be confident it’s a trustworthy cause that will allot your money to the actual charity and not some pompous CEO looking to buy a third 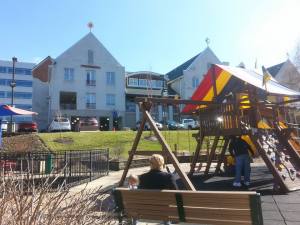 yacht.)  I’ve stayed in multiple RMH’s in various cities, but this one in Cincinnati blows them all away.  They had a game room with arcade games, game consoles, pool and hockey table, there was every crafter’s dream of an arts & crafts room (I mean, you should have seen this thing….heavenly lights shined down upon it and you can almost hear the beautiful angels singing praise), an awesome playground.  The building was massive, the 5th largest according to the staff.  To say I was impressed was an understatement. 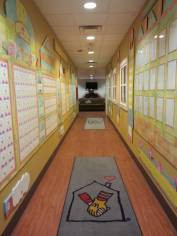 discuss surgical history, risks, heart condition, etc.  Then we spent the rest of the day enjoying the amenities thanks to RMH.

For the last two weeks I have been a nervous wreck anxiously anticipating Drew getting ill with fever.   The two weeks leading up to surgery is always the worst as a fever can throw a wrench in the process.  He hasn’t been ill in I don’t know how long so it seems inevitable to happen any day now.  I finally started to relax on Monday since we managed to avoid any illness, but I still silently begged good luck and positive energy to spare Drew from any lingering germs lurking on the playground and public places Drew seemed to endlessly touch.  So, early Tuesday morning when the staff at Cincinnati Children’s Hospital took his temperature, I breathed a huge sigh of relief.

Visitor after visitor, signature after signature, time seemed to pass by quickly and before we knew it, they were wheeling Drew out.  We got to wear scrubs and escort Drew through a sterile hallway to the operating room door.  Drew was in good spirits right up until it was final goodbyes (or “see you later”s) when Drew started to get emotional.  Drew’s been through more than a

dozen surgeries, but this part never gets any easier.  About this time, they pushed some Versed through his IV and though Drew was still awake, any care in the  world washed away and he began to slur his “I love you’s”.  They pushed him into the OR, closed the door and the four-hour wait began.

It was a long four-hour wait in the waiting room.  We all took turns going to the snack machine and coffee breaks.  I pondered what it would be like to have a finger removed and another one in its place.  I experimented and compared the feeling of my thumb and index finger pressing together and then tried to press my index finger to my middle finger.  Would it feel like my index finger touching my middle or would it feel like my thumb and middle finger touching?  #deepthoughts  I can’t wait to see his hand and what a shame I’d have to wait four weeks until his cast was removed to see it. #hidethescissors

We anxiously awaited an update around the half-way point as we were told by the team.  But, no update came so when the four hours were up, we were once again getting antsy thinking about worst-case scenarios.  We grew frustrated with the frequent calls for updates for the other families, some getting 2-3 calls while we had yet to receive one.  Finally, “Gatten family! Update for Gatten family!”  I raced up front, not sure if Daddy was able to keep up.  I was relieved to see a smiling Dr. Cornwall awaiting us.

Everything went really well and he even took pictures with his cell phone of his new hand and I have to be honest with you, I might have been slightly more excited about this than hearing that Drew was out of surgery and in recovery. 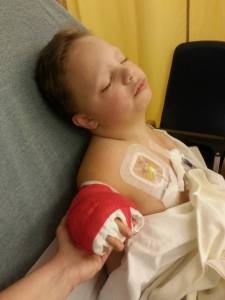 It wasn’t too long before we got to go back to see Drew.  And, he was doing so well that they found a regular room in the hospital very quickly so we were settled into his room for the night before we knew it.

Drew’s cast is fairly bulky.  They were a little worried about even putting a cast on considering the shape and the short length of his arm.  They ended up putting tape all around his arm (tape directly onto his skin) so I’m very concerned about that.  There is a ton of gauze around his hand then wrapped in red bandage so his entire arm looks like a large caveman’s club to be used to knock a woman out and drag her by her hair.  He even has bandage between each of his remaining fingers restricting his use even more.  We’ve already crossed o

ut using the power wheelchair now that he has no ability to use the joystick.  It would be like using the fat end of a baseball bat to manipulate the stick.  We thought at first he’d be unable to feed himself being unable to grasp anything much less get his hand to his mouth, but he has surprised us by actually using his left hand to eat.  His left hand has almost no length at all, his hand almost coming directly out of his shoulder, so he doesn’t use it much.  And, luckily he has his own school assistant to help him with certain activities thanks to his IEP to transcribe for him until he regains the use of his hand.

Drew felt so well after coming home that he actually went to school this morning.  I can’t wait until he gets back so he can tell me how it went!

So, in four weeks we return to Cincinnati to remove the cast and we’ll also be referred to an occupational therapist who will teach us exercises to strengthen his new thumb.  I can’t wait to hold his new hand!

On a quick last note, please don’t forget that we’re raising money for Drew in preparation for our travel to Florida for his next surgeries.  As I calculate costs and review funds available, my panic attacks are getting closer and closer to each other.  I have all but confirmed a close condo nearby the hospital which is more affordable than nearby hotels, but higher cost than the RMH an hour away.  I’m justifying spending more by concentrating on the fact that I won’t have to make a two-hour drive five days a week with a closer place to stay.  But, please share and donate if you can.  We have just enough to cover lodging but I haven’t calculated costs for utilities or the travel to get there.