It has been pretty hectic in our household this past month.  I’m struggling with how to smoothly transition between one subject to another and, well, basically figuring out where to start….

So, it’s been over a month since Drew’s hand surgery.  He had his cast on for a total of five weeks and it was massively frustrating.  Due to his short arm length and unique shape of his arm, his cast was only bandage and tape.  It was fine for the first week, but then we noticed it was sliding off and we had to make an unplanned trip to Cincinnati to have them redo it.  That cast only lasted a few days before it had to be redone.  Luckily, the nurses at the hospital had given me supplies in such a case so my mother-in-law and I pretended to be cast technicians and unwrapped his cast and rewrapped a new one.  That cast lasted about nine days before it had to be redone due to slippage.  From then on out, the cast had to be unwrapped and rewrapped every day to every other day.

During all of the cast changes, my anxiety continued to build and build.  Was I wrapping too tight?  What if Drew’s thumb is in a position it’s not supposed to be because I didn’t wrap it right?  What if I screw this whole thing up and ruined the entire purpose of this surgery?  During the first cast change attempted by myself and mother-in-law, I got a quick glimpse of the staple that was placed in his thumb during the surgery to hold everything together and I only got a quick glimpse, but it seemed as if the staple had a point on one end because it was catching the gauze.  From my studying the after surgery photo shared with me by the surgeon, it appeared to be a staple with both ends secured beneath the skin surface and now I’m seeing one of the points outside.  I tried to pretend I didn’t see it and tried to push back any anxiety, but the image of his broken misplaced staple haunted me.

I was so freaked out about it, it took me several days to mention to anybody.  I was so consumed with guilt having rewrapped his cast wrong.  I was consumed with distraught at the thought of his new thumb dying and having to be amputated for good.  I tried to convince myself to call the doctor for advice, but I was embarrassed and afraid they would remove Drew from my custody for causing this harm (I’m a virgo and we’re known to over-analyze, worry and only think of the worst-case scenario…it’s a problem.  I admit it.)

I tried to be reasonable.  I was disappointed to confirm the staple had, in fact, moved out of place when I finally got a good look at it during one of his cast changes.  I was hoping that I was wrong the whole time, but when I saw the staple had moved, my heart sank.  I did finally, with my tail between my legs and downward cast expression, contact the doctor expecting an emergency trip to Cincinnati on a life flight, a long lecture and condemnation from a furious surgeon, followed by legal charges of neglect and assault.  I tend to excessively worry about Drew and his health, what can I say?

Well, it was much relief to hear that it wasn’t a staple as I would define it (as two ends secured), it was more like a pin and what I was seeing was the tip and there was only ever one end secured in his skin.  The pin is able to spin 360 degrees and the fact that the end was bent in a different position was totally fine.  Whew!  I’m sure my blood pressure decreased by 60 points by the end of that conversation.

So, between all of the rewrappings and massive internalized panic attacks, the five weeks with the cast were miserable.

But, finally, this week, we made the trip to Cincinnati to have his cast removed.  First, it was time to remove the pin.  Seeing as kids anticipate pain, Dr. Cornwall reassured Drew that “most kids tell me that it feels weird.”  Dr. Cornwall placed a protective layer of gauze across Drew’s lap, whipped out this weird scissor-like tool and without any hesitation or pain medicine, just pulled it out.  Now.  I thought this was a little staple…like, just a small staple like out of your stapler on your desk.  I figured it was just secured somewhere in the bones close to the skin surface so this thing maybe was just a few millimeters long beneath the surface of his skin.  This is how I envisioned it in my head.  After all, he was removing it without any pain medicine at all so it couldn’t be too far into his skin, right?  No.  This thing is two inches long….about the length of your index finger!  It was secured through his thumb and all the way up into his wrist.  And, he just pulled that thing out like it was nothing.  Of course, Drew was hysterical during the procedure.  Once he calmed down, I asked him if it felt weird like Dr. Cornwall said it would and he emphatically declared, “No.  It did NOT feel weird.” 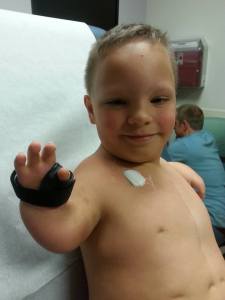 Afterwards, we visited with an occupational therapist who custom-fit a little hand brace to protect his new thumb and taught us therapy exercises to do at home.  We’ll be seen there in Cincinnati again in three weeks to review progress and then again three weeks after that.

We started therapy on Tuesday night.  So far, he has little movement in his thumb, which is normal.  It makes it hard to determine if he’s actually doing the exercise as instructed or just pretending to do the exercise and avoiding work.  One of the exercises requires his to pull his thumb into his palm like we do when we indicate “4” using our fingers and the following conversation happened:

Me: “OK.  Now pull your thumb in like this….(demonstrating using my own hand)…like you’re going to make the number three.”

Me: “Well, I have four fingers up because that’s how many I have when I tuck my thumb in, but you only have three.”

With enough therapy we should see more movement and his function will improve.  So, I’m going to take a picture of Drew doing a ‘thumb’s up’ every Thursday for a motivational exercise called, ‘Thumbsday’ so please follow my Drew Walking Tall Facebook page to encourage Drew every week.

On another note, would you believe that we are STILL waiting for Drew’s braces?!?  It’s been nine…NINE weeks.  Nine.  It’s typically a 4-6 week process of doctors documentation, insurance claims, Medicaid claims, etc.  Actually making the braces is the easy part and they often are completed far before all of the red tape.

So, a few weeks ago, I came on here and vented frustrations about Drew’s doctor holding up the process by taking their time signing a piece of paper.  Well, I assumed it was Drew’s pediatrician.  The orthotics office kept saying, “She hasn’t returned the form yet.” and Drew’s pediatrician is female so I assumed it was her office delaying the form.  Well, it turns out it wasn’t her, it was Dr. Paley’s office that were holding up the process and that just added an entire new layer of frustration because, after all,  his office should understand how critical these braces are.   After some prying, the orthotics went through the following timeline:

I was frustrated with the process so I made an attempt to persuade the administration office to complete the form so we could hurry this process along as did the orthotics office.  We were told, “I have the form.  I’m really busy today, but I’ll get to it and fax it when it’s completed.”  My inner bitch silently sneered, “This isn’t a new task we’re asking you to complete.  We aren’t ‘cutting in line’ here.  You failed to complete this task A F#$KING  month ago so why are you putting us on the bottom of your ‘to-do’ list instead of immediately stopping whatever it is you’re doing and just fill out the one GD section of the form?!?”  *smoke coming out of my ears and actual fire darting out of my eyes*

Finally, the form is completed and immediately rushed off to Medicaid and the only other thing we’re waiting on now is a final approval in the orthotist’s system.  I’ve called every day to every other day this week hoping that it would be ready this week, spring break, so we could not have miss a day of school.  But, alas, no such luck.  As of this week, no approval gained.  AND, Drew’s brace broke finally so he’s been without his braces now a couple of days and let me tell you, it is torture knowing his braces are ready and just sitting in a corner waiting on Medicaid.

It was with utmost professionalism that I plead my case to the orthotist, because after all, it was only Medicaid taking a long time with this final step, and holding back tears and trying to remain calm I urged her to escalate within Medicaid about the absurdity of this.  At the completion of Drew’s major round of surgeries, Dr. Paley put the fear of God into me about how important it is that Drew wear his braces ALL. OF. THE. TIME.  He will lose extension as his muscles and bones attempt to return to their original positions.  Wear the braces.  All of the time.  While under care of a different orthotist, we’d have to wait the standard 4-6 weeks (or longer once) for new braces.  It’s been so long now so I can’t remember exactly why, but his old braces were not usable thus during the wait he didn’t wear braces and what do you know, Drew’s legs have slowly lost extension.  Over the course of several long periods of time without braces during which new braces were made for whatever reason, Drew’s legs are no longer anywhere NEAR straight and now Drew is having three additional surgeries this year to correct that.  He’s having THREE surgeries because he lost his extension during periods without his braces so, in effect, insurance and Medicaid are having to spend more money and more importantly, putting Drew through additional risky procedures.  It is infuriating!  I told the orthotist’s office that once Drew has these next surgeries, any long periods of wait will be unacceptable.  Period.  I don’t know what can be done, but something will because it is abuse to cause this amount of damage to Drew because of all of the minute bullshit on these forms.  Why isn’t it as simple as, “Drew needs braces.” and that’s it?

So, we have an appointment in Elizabethtown on Thursday to finally get the braces, assuming Medicaid FINALLY submits their approval on Monday as anticipated.  Drew’s already missed over a week of school this last quarter and is going to miss the last 12 days of school due to his surgeries in Florida next month so what is one more day?!? *Rolling my eyes*