Drew ended up spending three nights in the hospital instead of two as he did for his right.  His pain level was quite significant despite the seemingly pleasant first day.  But, he had a much harder time weaning off of the morphine this time.   The continuous flow of Diladid had to be reconnected after Drew became too unbearable when the first attempt was made to begin the process.  And then, Drew was unable to avoid pushing his PCA (Patient-Controlled…don’t know what the A stands for, but it was morphine on-demand via a button he was permitted to push every 15 minutes.)  Unless he could go without pushing his button, satisfied by oral pain medication he wouldn’t be discharged.  And, Drew was just in too much pain.

But, eventually, we were able to finally disconnect IV pain medicine and control his pain with oral medication so we were discharged on Saturday afternoon.  I think the nurse might have been slightly happier to see us go than even I was.  Drew is quite dramatic when he’s in pain, uncomfortable or anxious so Drew made sure to make his displeasure well-known across the hospital as he removed the bandages.  For us, removing the bandages is symbolic of the end of this stress, freeing us from the confines of the hospital and something looked forward to and find relief at the breaking of the “chains.”  For Drew, however, it’s when he “goes out with a bang” so  he isn’t forgotten nor will the staff forget how miserable they made his life so it was only with loud shrieking and angry outbursts that would mimic being unexpectedly poked with a cattle prod by a cruel prankster that the nurse endured in his ear as each IV-dressing was removed.   I don’t think he could move us fast enough off of the floor.

Drew’s been up and down this time.  He is achieving some milestones faster than last.  He has lifted his right leg sooner than he did his left.  We’ve moved him from one chair to another with no painful outbursts sooner.  However, pain is still very present in his everyday life.  He’s taking his pain medicine every four hours or less, though days are slightly better sometimes going 4.5-5 hours.  Nights, on the other hand, are stressful.  He doesn’t go two hours without waking up moaning and yelling, which I have to quickly deescalate as we live in a condo with neighbors  so I imagine it sounds as if we’re holding a child against his will and performing painful and torturous experiments on him.

In addition to the pain at night, his….uuhhh….high-maintenance and obsessive perfectionist sometimes unattainable needs are at their worst.  Drew has always been quite particular about certain things.  Like, the blanket.  The blanket is the worst.  If there is so much as one thread out of place, he will completely lose his mind.  He makes endless attempts to situate the blanket according to his satisfaction, but the poor thing has no arms so he’ll fuss with and pull and grunt and shift endlessly as he tries to get it right.  I try to help, but I only make it worse by BREATHING which he’ll loudly and rudely object to so I’ll stand by steaming as I try to patiently wait for him to be satisfied.  And, because I live with this every damn day of my life, I know that walking away and letting him fix it himself would be pointless because its inevitable that he’ll eventually give up and call for me. So, I’ll come in and he provides very abstract directions to “do it this way….no…NO! Not like thaaaaaaat!! No…like this…there…no! NO!” and not only that but he does it in this voice that is ultra whiny and nasal-y and it makes me absolutely bat-shit insane.

All of the pain and extreme sensitivity in his legs now enhance the stress and make getting the blanket just right even more unattainable.  Whenever we do finally get it right, I cautiously back away as if  I’ve spotted a gang of armed ninjas in a dark alley and hope to avoid detection so not to disturb the air in the room that may affect the perfect blanket arrangement.

Drew’s pain level has not only been unbearable for him, but it’s making life for me pretty miserable too.  The poor thing has endured so much pain it’s as if we have all been granted a maximum amount of endurable pain at conception and Drew’s allotment has been reached therefore any excess pain, regardless of how minor the pain is, overflows and his reaction to the pain is not proportional to the actual pain experienced.

For example, yesterday, we went to Dr. Paley’s clinic to remove the dressing off of Drew’s new incision.  It’s just a soft rubbery bandage running from his hip to below his knee, the length of the incision.  Now, this boy has had dozens of pins, some the diameter of #2 pencils, drilled through skin, muscle and bone, he’s had his rib cage pulled open TWICE, he’s had a part of his body amputated, a therapist once pushed his leg so hard that the femur broke so this boy has experienced some very extreme pain.

So, one might think that taking a bandage off would be child’s play.  But, you’d be wrong.  Even before we start, Drew starts his shivering anxiety attack and tears begin to flow.  Then, as he starts pulling the bandage (the doctor let Drew do the work himself), he groans in pain and after removing approximately 3 centimeters length of bandage off of his skin, Drew is exhausted and begs to take a break.  This makes me crazy.  He’s endured 18-19 surgeries, had I don’t know how many hundreds of shots, once fell on his face biting a huge chunk out of the inside of his lip and he is literally collapsing as if Michael Myers wielded a chainsaw through his knee.  It makes. me. crazy.

I mean, it makes me wonder how authentic his groaning and tears are.  I know he’s in pain.  There is no doubt.  His femurs were sawed in half.  He has 14-inch incisions.  He has metal rods from his hip to his knee.  His legs are now completely straight, basically over-extended considering the anatomy that he was born with.  But his level of crying and tolerance of pain doesn’t seem to be proportional to the pain being applied.

Scenario 1 – His morphine wears off and he feels every inch of his incision throbbing, the searing pain in his over-extended knee

After the doctor, seeing that it’s taken five minutes of hysteria to pull off 3 cm of a 14+ -inch bandage, yanked on the bandage to at least get half of the length off of Drew’s skin, Drew was FURIOUS.  But, I couldn’t help but mentally thank the doctor as I rubbed Drew’s back to try to calm him.  Of course, my advice and comforting words fell on deaf ears.  Drew didn’t want to hear how at the rate he was going, he was going to experience pain for 45 minutes or we could just pull it off in one steady pull and only feel pain for four seconds. “Nooooooooooo!!  Absolutely NOT”, Drew would protest.  There is no reasoning with an 8-year old.   I thought about just reaching over and yanking it myself for my own selfish needs to stop the madness, but I dare not break Drew’s trust.  So, I hoped the doctor would be the bad guy and finish it off.  But, finally, Drew succumbed and pulled the bandage himself, not the quickest, but he bit the bullet and pulled it in impressive-for-him time.

Then, we had to go to the hematology clinic to perform a platelet check since his levels have been unusually low.  I had to pay a $40 co-pay just for them to prick his finger and put three drops of blood under a microscope.  I imagined the following conversation ensuing,

Doctor: “His platelets are really good now.  He looks like he’s getting back to his normal range.”

Doctor:  “Get the hell out of my office.”

Turns out they were on the way back up to his normal and I didn’t ask the doctor for an unnecessary transfusion.  🙂

So, as long as Drew is receiving his pain medication on time, he’s pretty tolerable (during the day.)  I even moved him yesterday without the assistance of Yaya (who is here visiting) and Drew had no objections.  Drew and I went to see TMNT at the theater yesterday after the doctor appointment.  As I said, nights are still a problem.  I’m hoping that the only reason last night was especially difficult was because I was unable to get Drew’s prescription for Tylenol with Codiene refilled and he had to settle for regular Tylenol throughout the night.  Regular Tylenol seems to be effective during the day, but hoping I’ll get the Codiene tonight to make tonight better.  Looking at the clock, I just now realize that it’s been 6.5 hours since Drew’s last dose.  That’s pretty significant. 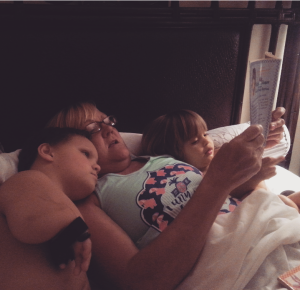 In a couple of days, Yaya will be flying back home and I’ll be here with the boys by myself until we make arrangements for Daddy to fly back.  We aren’t sure when that will be as he’s going to working a lot of extra shifts to make up for all of the time he missed due to his hernia.   So, now we just wait for six weeks when Drew will have the rods removed in what I hope will not be as a major of a surgery as putting them in.  And, that’s when the physical therapy starts and that’s when the real work begins.