Well, it’s been six weeks since my last post so in review:

While it was tough to take on the additional needs of Drew, I somehow made it work.  It got much easier once his pain subsided.  We managed to go shopping on several occasions and I’m sure I was quite the sight.  I pushed Drew in his manual wheelchair with one hand and pulled a shopping cart carrying Holden behind me with the other.  It was like a little Gatten train and surprisingly, it wasn’t as impossible as I initially feared at the prospect of Daddy flying home leaving me to contend with this process.  It wasn’t ideal, but it worked.

With few activities to choose from yet the desperate need to cure a bad case of stir crazy, we spent a lot of time at the pool.  At first, if you recall, Drew was a little uneasy in the pool and required extensive care as his leg restrictions hindered his ability to move around.  But, after a few visits the pool, Drew became more and more acclimated to his legs so I could relax a little bit.  Then, he could actually swim briefly and my proximity grew less important.  Then, he could swim independently for long periods of time, doing a semi-butterfly stroke even coming up for air and I was no longer needed to assist him.  Before I knew it, he was 100% independent in the pool and I could actually exit the pool if needed.

If you think about it, the fact that he can swim  independently in the pool is phenomenal.  First, he has short arms.  That’s a huge obstacle to be faced with when in deep water.  Now, his legs were rigidly locked in a fully extended straight position and prevented from bending by a metal rod driven through the center of the femurs and tibias (in each leg).  I mean, really think about this.  Amazing.  Here’s a video.

We finally visited with Drew’s orthotist to have new braces made for Drew.

Nathan had returned home at the beginning of June and not scheduled to return until late July – about eight weeks of seperation.  Being away from each other isn’t new to us because being a pilot on a barge, he goes to work for 21-day shifts meaning he is literally GONE for those 21 days, not “he only comes home so late that I barely see him so it feels like he’s never there” but I mean, 24/7 for 21 days he lives, eats, showers, works, breathes and exists on the boat.  And, the same for when he comes home, he’s home for 21 days with no work.  (It’s a dream job with 6 months/year of off time.)  He’s been on the river in some fashion of barge work since we first got together so being separated for long periods of time is our normal.

So, when Daddy returned after two months, it was quite the event for all of us.  It is great to have him back! We missed his massive hugs, silliness, supportive shoulder.  Of course, I was pretty exhausted from weeks of heavy lifting, painful moans, cumbersome baths, tedious shopping trips, constantly carrying urinals full of pee, and general stresses of raising a two children, one with extensive special needs and another who has evolved into a three-nager as defined by Google:

that age when your 3-year-old continually acts like they are going on 13. They have an attitude for miles, a stubborn streak, and want what they want… when they want. Hell hath no fury like a threenager who refuses to nap.

Daddy was scheduled to fly into Orlando Sunday evening and Drew and I counted down the hours until right about the time it was time to start getting things together for our 3-hour road trip to Orlando when I received an alert from the airline that his flight had been delayed two hours.  That news went down like Big Boy for Drew.  Then I did the math and realized we’d be getting back home close to midnight followed by an early morning wake up at 5 am to make our way to the hospital for surgery.

So, it was only in semi-consciousness that we woke and made our way to the hospital.  As always, we started in pre-op with blood work.  We were relieved to learn that Drew’s platelets had finally seemed to return to their normal so no transfusion was necessary, unlike last time.   But, as the hours in pre-op passed, we grew impatient, hungry (we’d avoided eating in front of Drew who was NPO), caffeine-deprived.  Finally, after 5.5 hours of waiting, they wheeled him back to get started.

Surgery didn’t last long at all and within two hours, we were by Drew’s side.  By the time he got   discharged, we’d been at the hospital for ten hours.

Drew was now locked into his braces which act like casts to keep his legs fully extended and locked in order to maintain his extension.  The braces are somewhat awkward because he’s been without them for two months (and we grew accustomed to this surprisingly quickly) and he has a new addition of an hip piece that he wears like a belt and then  connected to his leg braces.  Drew was in pretty significant pain, but still not quite as extreme as the previous two surgeries (and don’t forget this one!)

But, a mere 24 hours after removing the rods from bone marrow chamber down the center of each femur and tibia, Drew was scheduled for physical therapy.  It seemed kind of inhumane to jump in so quickly without much recovery period, but such is the process to correcting legs and regaining function.

I hadn’t been looking forward to physical therapy at all.  Drew can be one of the most stubborn, defiant and disgruntled beasts when he’s being forced to do something that he disagrees with.  And, Drew doesn’t handle pain well at all.  I find this surprising because one would think that with all of the 20 surgeries he’s endured, the dozens of scars, broken bones, etc. that he’d have developed a high tolerance of pain.  But, the exact opposite seems to be true.  It doesn’t matter whether he gets a minor scratch that doesn’t even break the skin or pulling a tooth with no novacaine, his dramatics are equally extreme.  His reaction to pain is in no way correlated with the amount of pain applied.  And it. Makes. Me. Crazy.

I was dreading the first visit in which he’d be asked to lift his leg or attempt to bend it or anything other than sitting still, undisturbed and unbothered because any amount of pain or discomfort and he will loudly and rudely object.  I realize that it is painful – I certainly believe that it’s painful – but, I don’t know how to teach him to breathe through the pain, to try to withstand it, to push past it.  But, I guess when you’re eight and you’ve endured surgery after surgery and suffered far more pain that average, then I guess any amount of pain is frustrating, exhausting, disheartening and just plain ol’ sucks!

So, we reported to the hospital for his first appointment, but first we had to go to the wound clinic to change a bandage which appeared to be overly saturated with blood.  This was going to be an awesome (insert sarcastic tone) start to our visit because when faced with removing a bandage from his skin, Drew, of course, became hysterical and acted like he was fixing to be roped to a guillotine.  It wasn’t with loud objections, huge tears, and a piercing scream in the tech’s ear that the bandage was removed.  I’m pretty sure that the tech silently cursed Drew and will run if he sees us approaching his office again.

Finally, I wheeled a red-faced, tear-soaked, whimpering Drew to the physical therapy office and did my best to be the coach in the locker room as we waited to run out onto the field for the game of our lives:

Drew, we’re about to go  in here and do some therapy and they’re going to ask you to do things that are hard and painful, but remember that this is the worst it will be, OK?  The harder you work, the easier it will get.  It won’t always be this painful or hard.  Just remember, it’s going to get better.  If you go in there and refuse to do the work, fight back, and have a bad attitude, you will never walk again.  I know this is hard on you and I know at times its painful, but try not to think about just this moment.  Think of the end when you will walk, when you join the soccer team again, when everything is back to normal.  All athletes train and fight hard to participate in their sport – they don’t wake up and play the game.   They sweat, they push themselves, they push past the pain in order to better themselves.  They fight for it  and if you want to walk again, YOU HAVE TO FIGHT FOR IT.  You can go in there with a bad attitude and be miserable and refuse to do what you’re asked and you will only limit your abilities and YOU will be responsible for your failure or you can try your best and push past the pain and think about your end goal and you can be better than you were before these surgeries.  You can go in there with a good attitude and do the work or you can go in there with a bad attitude and be miserable and do the work, but either way, you have to do the work so just do the work and try to make the best of it, OK?  Don’t be miserable and do the work.  Be the best you can be and do the work.  Your attitude will determine how well you do at the end of this, OK?

So, it was with reservation and much hope that we went back to get started. 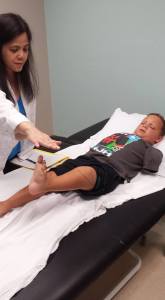 I was very surprised and pleased to see Drew do everything I encouraged him to do:  he breathed through 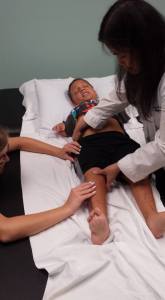 the pain, he cooperated, he tried his best.  He actually was excited himself to see what he could do.  He would say, “Can I try to bend my leg myself and see how far I can get it?”  He was so excited to move his  legs that he’d start the exercise before the therapist was even ready. 🙂  My heart swelled with pride to see how motivated he was to get back to good.

So, he’ll be doing therapy 2 hours a day, 5 days a week for the next 6 weeks.  Hopefully with how motivated he is, he’ll be back to walking faster than I would have imagined! 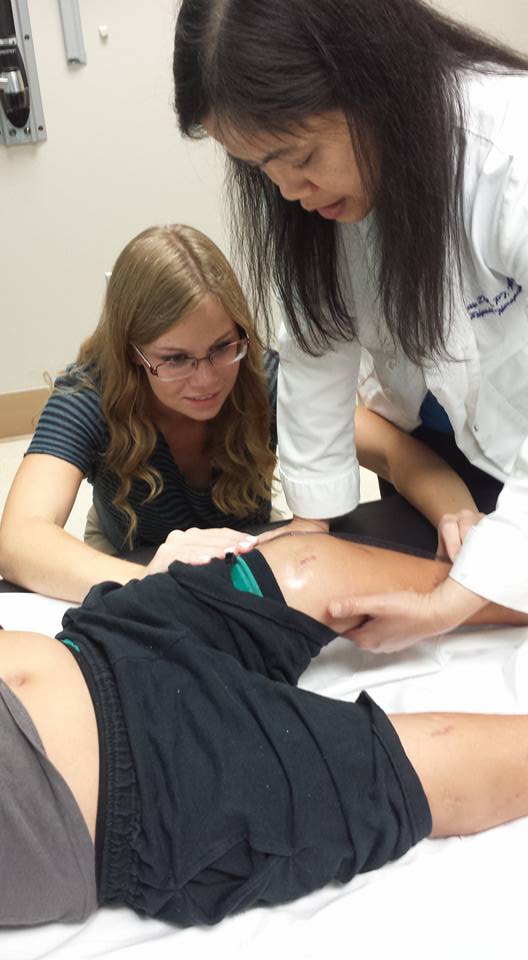