I know it’s been  a long time since I’ve shared.  I’ve just been going through the motions of raising a mobility-challenged child so it feels slighty routine and unremarkable, yet there are highlights of excitement.

Physical therapy has been normal.  I am disheartened to acknowledge that Drew has lost a lot of range of motion that he had acquired immediately after his last surgery.  It’s a knife through the heart to hear that his legs bend upwards around 20 degrees LESS than they did in September.  It’s great that his legs are so straight and he’s retained the ability to straighten his legs, as this was the problem we sought to resolve with these summer’s surgeries, but one doesn’t walk with stick-straight legs.  There’s a natural bend and straightening motion.  I imagine that walking with unbendable legs is twice as exhausting as a more natural gait and I’m sure it contributes a lot to Drew’s slow pace.

But, that’s not to say that therapy has been ineffective as Drew is walking once again! It seemed to take an ETERNITY to go from

barely able to withstand the weight of his own body to attempting to take his first independent step (again), but once he made that first attempt, it seemed as if independently walking happened in the blink of an eye.  He’s not 100% yet as he still has some endurance-strengthing he needs, but seeing as he doesn’t need close by hands to support him, I’m happy with the results.  It’s still a little nerve-wracking watching him walk without me being at his immediate side, but I’m confident enough in his strength to bear it.  I’d say he’s 90% back to his pre-summer 2016 self. 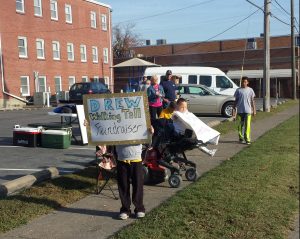 A few weeks ago, we made it official by paying the $2000 non-refundable deposit to reserve his spot at Believe Physical Therapy in Florida, the intense 3-week physical therapy program I’ve described.  Thanks to support from friends and family, we were able to raise over $1000 at a pork chop sale and a Scentsy fundraiser, along with just good ol’ donations.   A good ol’ home equity loan got us the remaining $5200 (plus more for lodging).

So, now we wait.  We will drive to Florida (sigh….) in mid-January and Drew will complete the therapy three days before his birthday and hopefully….just hopefully we’ll be able to take Drew to Disney World for a day.  He wants a surprise birthday party, but being that we’ll be away from home for three weeks prior to his birthday, I won’t have the time to organize anything so I’m pretty confident a day at Disney World will suffice!

Speaking of which, I’ve started doing research on theme parks and kids with special needs.  Drew has many special needs to   consider: mobility being a huge one.  All parks are handicap accessible, so check!  Drew wears long leg HKAFO’s so I wonder if leg room will be a problem.  Should we just remove his braces for the day?  But, of most concern to me: his lack of arms/reach.  Once, while at Universal Studios with Drew when he was thr 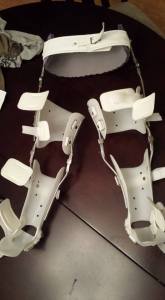 ee, he was prohibited from riding a toddler train ride (aka slow-moving, no flips, low impact) because he couldn’t reach the lap bar while leaned back in the seat (he had to lean forward and because his back could not touch the back of the seat, we were removed from the ride.)    So, I don’t want to be prohibited from riding a lot of rides.  With that being said, if he is permitted to ride, I don’t want it to be at the expense of his safety!  What if he falls out because he doesn’t have these long arms that act as leverage?  I realize that Disney would not permit anyone’s safety to be in jeopardy which is why I want to make sure we aren’t going to spend a bazillion dollars and not get to ride anything.

In other news, our next trip to Florida is less than three weeks away.  We’re going for a follow-up with Dr. Paley.  I booked the trip back in September and dummy me, booked a flight on a dirt-cheap airline excited about the low-cost, but the catch is they only fly on certain days, only 1-2 times a week.  So, great, I spent less than $100 on our flights, but now I gotta pay for additional days in a hotel and a rental car *dramatic slap in my forehead*.  Impulse buy, much?!?

Somehow, miraculously, I managed to secure a room in the Quantum House, a Ronald McDonald House equivalent.  Even though I committed to never again applying since they were booked the previous seven times I applied, even 9 months in advance, in a last-ditch effort to make up for my lack of foresight in booking this airline, I made a hail mary attempt and my jaw hit the floor when there was a room available!

To save money and hassle, only Drew and I are going while Daddy stays home with little brother.  Because of the airline’s flight limitations, Drew is set to miss four days of school because of ONE morning doctor appointment (which actually is a little better than my initial booked trip requiring him to miss six days of school, but a school field trip to see The Nutcracker scheduled for what would have been our departure date left me feeling guilty enough to change the flight.  Thank you trip cancellation insurance!)  But, I imagine we’ll fill in the time with swimming and some touristy stuff that we didn’t get to do this summer due to Drew’s limitations.

So, all of these expenses have left us pretty apprehensive.  Renting a car for December.  The flights.  The room.  Usually, we’re able to get reimbursed for most expenses thanks to a special fund through our bank that was established by a local family for qualifying families who travel for medical treatment.  We get reimbursed for up to $20/adult for food, up to $50/night lodging and even mileage on our vehicle for the travel (and special exceptions have approved flights and a rental car for me before.)  But, as there are dozens of families in our area who are recipients, there is a maximum yearly reimbursement allotment.  And we reached it before our summer was over.

I’m anxious to see how this physical therapy pans out.  With all that I know about it and all of the patient stories, I’m excited to see how it helps Drew.  Of course, there is my underlying Virgo taunting me with worse-case scenarios and pessimism.  When I first learned of the program’s 4-hour per day routine, I remember absolutely scoffing at the idea that Drew would endure that much therapy.  He was then doing one hour of therapy per day and getting him to cooperate and behave was a challenge so I immediately disregarded four hours a day.  He was four/five then.  Now he’s eight and is more cooperative, although the micro-manager in me, who endures extreme pressure of insurance limitations and precious minutes being wasted away to Drew stalling an exercise for silliness, wishes he’d be as hardcore to make the session as productive as humanly possible as I am.

Sometimes I struggle observing Drew during therapy.  His physical therapy time is so limited that I find it unbearable for any minute to go wasted.  I am so strict and wound tightly during Drew’s therapy sessions that I’m sure the therapists and probably other patients desperately want to feed me a xanax.  Every therapy session to me is precious.  I know what number this session is in our insurance coverage.  And as the numbers dwindle close to zero sessions remaining, my nerves become shot.  I snap at Drew.  I have zero tolerance for any silliness, half-ass exercises or delays of any kind.  Knowing that we’re paying $7200 out-of-pocket for this therapy in Florida is going to make the day even more painful.   I want to stay and observe, but I know I won’t have the patience or inner peace to too closely.  I’ll definitely stay to capture a lot of moments and be involved in his progress, but I’ll probably have to step away too to decompress!  I’ve always said that if I don’t have stress-related heart disease by the time I’m 40, it’ll be a miracle!

Speaking of therapy and insurance-coverage limits, Drew has currently reached his limits on insurance and we’ve gone to billing KY Medicaid for sessions.  However, they only approved six sessions and we must use all six sessions before requesting more.  And, we can’t go to therapy (unless we pay for it out of our pocket and we don’t have the money to do so) until they approve additional sessions so as it stands now:  Drew is not getting any professional physical therapy because we’re in limbo waiting for new sessions.  Let’s all hope we can get back on schedule next week.  I mean, it’s great that he’s walking, but as I said, he’s lost range of motion while undergoing therapy so can you imagine the setbacks he’d experience with NO therapy?

Also, no way to transition to this so just going to insert it here: Drew has excessively outgrown his power wheelchair seat so upon our return from Florida, we made a phone call to the service provider to have the seat replaced.  But, since he’s had the chair for five years, they felt it was time to get a whole new wheelchair.  Even though Drew is walking, he still requires the use of a power wheelchair for long distances and in certain situations.  So, we met with them and discussed all of Drew’s needs.  We even talked about a way that the chair may help him go from a sitting position into a standing position by some mechanical operation of the seat expanding!  He may even be able to have a seatbelt that he can buckle/unbuckle himself for full independence!  I can’t wait to see what they come up with!