Last week, Drew and I flew to Southern Florida for Drew’s first follow-up with Dr. Paley since this summer’s corrective surgeries.  Only a small part of me felt a little stressed having to complete yet another cross-country trip to Florida because bitter cold weather blew through Kentucky making our upcoming trip  a treat.  But, our delight was short-lived as we returned back to the bitter cold winter four days later.

It was just me and Drew this time in order to save on expenses of two additional plane tickets for Daddy and little brother, but more of a relief was not to have to contend with a fussy 3-year old in crowded airports and airplanes. 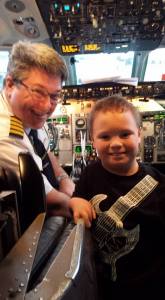 We flew on Sunday into Orlando and drove the 3-hour trek to West Palm Beach (hundreds of dollars cheaper than flying a major airline directly into WPB).  We arrived too late to check into the discounted Quantum House so we instead checked into a hotel I booked on Priceline.  Monday morning, we checked out and drove to our old condo to take advantage of the outdoor pool on premises and reconnected with neighbor friends to catch them up on Drew’s progress since our departure back to Kentucky.    Boy, was it nice swimming in an outdoor pool within two weeks of Christmas, although there was a small part of me that felt guilty for my ol’ Kentucky friends and families shivering in the cold.

Then we made our way to Dr. Paley’s for Drew’s appointment.   First, we were surprised by all of the changes to the clinic including new wall art, logo and even name.   Drew was taken back for x-rays.  The technician had to readjust his leg a few times and explained, “When his knee is facing straight up, his joint

is sideways” so they shot the leg from the side so his knee join would face the correct way.

I anxiously pondered what Dr. Paley’s response to this would be.

After a bit waiting in the waiting room, we were beckoned back to the exam room.  Dr. Paley and his team came in, reviewed his x-rays and let me ask my questions.  Physical therapists at home had a few questions of their own about a wobbly knee that allows his lower leg to swivel back and forth in an unnatural way and wanted to know if they could unlock his braces for weight-bearing exercises.  Dr. Paley wasn’t concerned with the knee movement as it is the unique nature of Drew’s knee and that we could start unlocking the knee as long as Drew didn’t buckle under the weight and injure himself.

I also asked Dr. Paley about Drew’s right foot which appeared to be folding in half, toes to heel.  He’s developed a severe crook in his arch and he does quickly tire so I wondered if his foot had anything to do with it.  Dr. Paley did say that he’d eventually have to do surgery on the foot and ankle which would include another osteotomy (sawing the bone in half) across the width of his foot, but seeing as Drew has been through so much this year (6 surgeries), there is no rush to do more.  So, we’ll return to see Dr. Paley again in June where I’m sure we’ll discuss the issue again making a plan to fix.

After the appointment, we checked into the Quantum House and then we drove to Delray Beach, about an hour away to visit a specific theater in which Drew was filmed for a commercial this summer.  The commercial was only shown in this chain of theaters and, of course, I had to make a point to go see it.  So we saw the commercial and it was great!  And, we saw Moana too.

Tuesday morning, we went to breakfast and then I started to feel ill so we rested in the Quantum House.  I eventually gathered enough motivation to take Drew to the beach where I was relieved to find that they had a free beach-wheelchair for me to use!  So, we spent the afternoon  wading in the ocean and collecting shells.

Tuesday evening we went Christmas light hunting and found an adorable neighborhood that elaborately decorated in a uniform theme entire streets with lights, inflatables, music and even one guy had rigged up a machine to the roof of his house that operated what must have been a 30-foot span mechanical arm with Santa’s sleigh and 8 reindeer that encircled his entire house!  It was magical!

Wednesday afternoon, we once again went swimming at the pool.  Well, I should say Drew went swimming as by now my head cold had hit me full force and I didn’t feel up to the challenge.  Go figure, this little mini vacation to Florida and I get sick! Story of my life.  Then, Wednesday evening, we drove back to Orlando (3-hours) in order to avoid a 3 am wake up call had we waited to make the trip for our scheduled departure.  We stayed in the Ronald McDonald House in Orlando, the same one we’ll stay in January so I used this as an opportunity to scope it out to ensure it’s going to suit us (we’ll be a family of four, including a 3-year old so the thought of staying in a cramped “Hotel” room with too few beds is concerning us).

Our flight home on Thursday morning was smooth and quick, though I was not a happy camper exiting the plane to a blast of cold biting wind!

So, that’s our trip in a nutshell.  I didn’t apply my typical writing style because I just don’t feel up to it as I continue to battle my head cold.  But, I did want to document the details of my trip none-the-less for a complete look at Drew’s history which I hope will one day entertain him as he reads through all of my posts and sees how much I love him!

Drew is walking better and better.  We attempted to unlock one brace at physical therapy immediately after returning.  I didn’t expect it to go well because, prior to Drew’s surgeries this summer, it was extremely taxing on him anytime he stood with one or both legs unlocked.  He’d visibly shake with the amount of exertion it took to withstand it for even just a few seconds.  And, witnessing what he went through this summer, I feared that it had all but completely eliminated any possibility of trying it again.  But, much to my surprise, he easily stood with an unlocked knee – pain-free – and even took steps.  It didn’t require additional physical effort and he didn’t strain a bit!  I was so excited because it gives me so much optimism for this upcoming therapy inFlorida next month.  Seeing him stand so easily with one leg unlocked for the first time made me realize that he just may accomplish things that I never thought possible!! Like, climbing stairs.  Running.  Keeping up with peers.  Not having to wear his braces 24/7.  I cannot wait to see what’s in store for him!