Special needs have all kinds of challenges, both upfront and many “behind the scenes”.  The recent weeks have been a little more “behind the scenes” frustrating and time-consuming than outward challenges.  Which, in all honesty, is a good thing because that means that Drew is sailing on routinely and things have been pretty stable for him medically wise.  But, I have continued to be challenged by the red tape of dealings with insurance that have me banging my head against a wall.

I’ve spent the last eight weeks waiting on a response from our insurance company for the reimbursement claim for the physical therapy services Drew underwent in Florida in January.  We were required to pay for the physical therapy up front ($7,200) due to the business not billing insurance directly.  In order to seek reimbursement, I submitted the receipt along with a handwritten detailed list of items (diagnostic codes, billing codes, etc.) that I carefully collected as requested by insurance.

I mailed said information within a week of returning home and waited patiently for approximately 5-6 weeks figuring it would take some time to process.  I contacted the insurance company to request an update and, uh-oh, insurance “claims” to not have received anything.  Insert annoyed emoticon here.  Luckily, I was prepared for such a scenario so I made a copy of what I had sent and put it in my filing cabinet so it came in handy to make a quick copy and REsend.

Meanwhile, Drew has not had any physical therapy since graduating Believe Therapy on February 3rd because I wanted to reserve our covered sessions for possible reimbursement therefore could not use them for ongoing therapy.   And, we can’t bill Medicaid until we’ve exceeded our primary insurance coverage limits.  My anxiety has not dealt well with the sudden lack of therapy as I anticipate that all of the good that was gained from the $7,200 physical therapy that required a 3-week cross-country stay has just disintegrated before our eyes making the entire ordeal pointless.

So, after I waited a couple of weeks for the insurance company to receive my RE-sent information, I called for a status check.  All of a sudden, they need something completely different.  Not just the receipt and the list of items that an insurance representative had read to me prior to attending therapy.  Oh no.  They need a “super bill” (???) from the service provider now because now that I’ve done what they’ve asked by collecting the first round of information and mailed it to them (twice!), well, they can’t just “claim” to not have received it because that would look suspicious so now their story is they “need a super bill from the service provider.”   No, they can’t just send me a check for reimbursement without me earning my “wages” with all of the obstacles and labor.  Evidently, I have the WORK for the money…put in hours…to EARN back the $7,200.

So, needless to say, I think insurance is BULL $@%& and am beyond fed up.

Oh, and I can’t forget this little tidbit of fun I’m also battling with the insurance company!  We receive a $2,500 bill from Dr. Paley’s physical therapy clinic for which I’m confused because we carefully adhered to our coverage limits of 30 2-hour sessions last summer so there is no reason for us to have any charges for physical therapy.  I, of course, speak with the clinic about these charges and learned that our insurance company is covering the first hour, but denying the second hour and apparently insurance companies have been known to say one thing and then change their mind and I guess this is allowed?!?  But, believe me, I will not be letting this go.  The clinic is escalating the charges and I haven’t called for an update in the last couple of weeks because I need to let this “Believe Therapy reimbursement hassle” die down before I get myself in a real tizzy that ends up with me in a straight jacket or in court for unspeakable crimes. 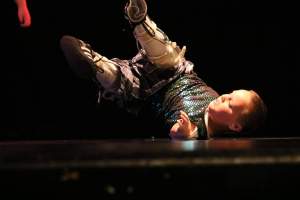 Drew is doing well.  Very well, in fact, despite not getting physical therapy.  Thanks to Believe Therapy, he is walking much more and was even able to join in on a dance performance this last weekend.  He did all of his dancing on his two feet, sans wheelchair.  I fully believe he would have been in no condition to endure twice weekly 2-hour dance practices for over a month prior to Believe Therapy.  It was very

rewarding to see him dance on stage and like every year, he got the most cheers and lots of whistles and hoots from the crowd – and not just from us family! – because Drew is well-known for the challenges he’s overcome.  He is such an inspiration for everybody and it makes him so happy to be able to participate in extra 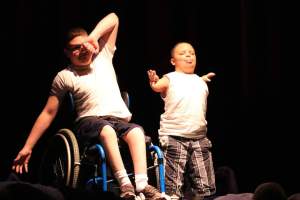 curricular activities with his peers.

This next week is spring break and I was struggling with thinking of activities to keep him and us entertained throughout the week, but have thought of a few options.  I was disappointed to have to discount going to a local indoor water park which Drew would die to go to, but he has become much too heavy to carry up the large water slides and many of the activities there would require too much assistance so we’ll likely not be able to attend as a family for many, many years until Drew is able (if ever) to walk without his braces on.  That was a hard pill to swallow because it would be his favorite thing to do and it hurts to avoid it.  Of course, activities like laser tag, hiking, climbing, etc. activities aren’t doable for Drew.  And, we don’t want to just go to the zoo and to the cinema.  But, I think I have found some things that he’ll enjoy almost as much as a water park so I’ll let you know how that goes in my next post!